Lehto Tilat Oy will start construction on ART Hotel Helsinki in Jätkäsaari in November. The hotel operator is Primehotels Oy and the investor is Fennia Asset Management’s Terrieri Kiinteistöt real estate fund. The project will be completed in spring 2021. Modern industrial prefabrication will be used in the project to increase the speed and quality of construction. 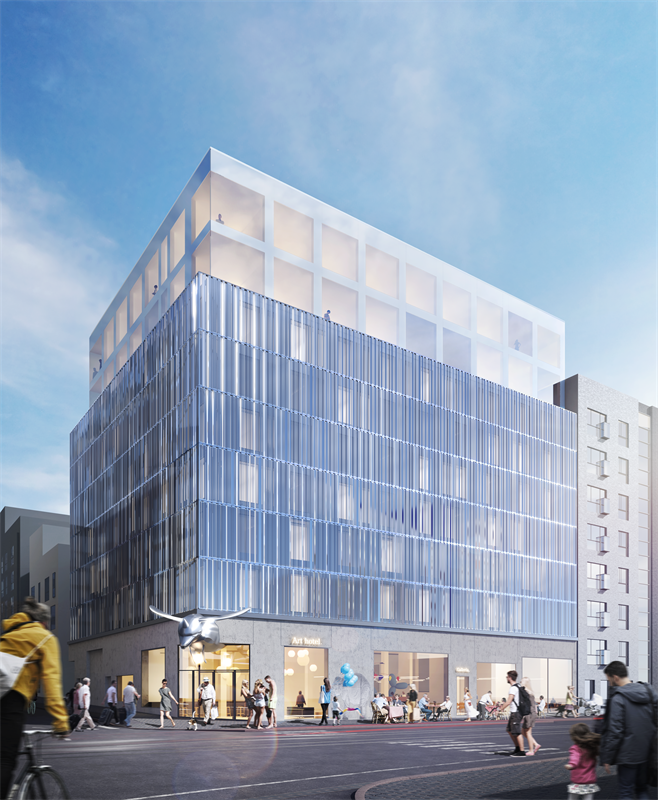 Architectural illustration. Does not represent the final implementation in complete detail.

ART Hotel Helsinki is a distinctive art hotel that will be built in Helsinki’s Jätkäsaari district. The hotel concept is unique in the Nordic region. The nine-storey hotel will have 173 rooms, a restaurant with capacity for 100 guests and other facilities. At the heart of the hotel concept is Finnish modern art, which will feature prominently throughout the building, from the facade all the way to the design of the hotel rooms.

“ART Hotel Helsinki is a unique project that will be implemented in collaboration with Finnish modern artists. The result will be a unique art hotel in Helsinki and a fine addition to Primehotels’ growth strategy,” says CEO Tomi Peitsalo from Primehotels Oy.

“This hotel project is differentiated by its excellent location in central Helsinki and the carefully considered art concept. These two cornerstones will support the long-term success of the project,” says Harri Oravainen, Fund Manager, Head of Real Estate Markets at Fennia Properties Ltd. Oravainen is in charge of Fennia’s real estate investments and Fennia is one of the investors involved in the Terrieri fund.

The developer and contractor selected for the project is Lehto Tilat Oy, which means that the project will benefit from modern industrial prefabrication, among other things.

“ART Hotel Helsinki is a premium hotel project developed in close cooperation between the hotel operator and investor. We are privileged to have the opportunity to build this hotel. Lehto will use industrial prefabrication during the construction stage, which will not only ensure quality but also significantly speed up the construction process. For example, the bathrooms for the hotel will be based on modules manufactured at our production facilities in Finland, in stable indoor factory conditions. LEED Gold environmental certification will be sought for the project,” says Area Director Henri Mämmi from Lehto Tilat Oy.